Opening remarks “The Rise of Fake News and How to Handle It” by Mr. Thepchai Yong, CAJ president on August 20, 2018

Written by colorpack on October 27, 2018. Posted in Announcement. 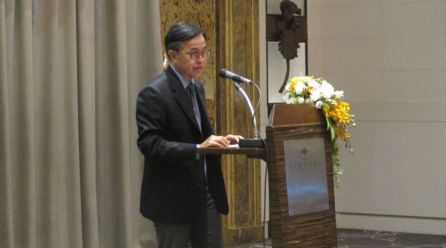 First of all, let me welcome you all once again to the city of Bangkok. And I hope you had a good rest last night.
On behalf of the Confederation of ASEAN Journalists, I would like to thank our speakers , especially those who are from overseas, for attending today’s forum, “The Rise of Fake News and How to Deal with It”.

There is no denial that fake news is no longer a problem for specific societies. Fake news has become a global challenge.

We have witnessed how disinformation and falsehoods can cause tensions, disruptions or even tragedies. And with modern communication technology, no society is safe from the scourge of fake news.

Recent incidents of lynching, prompted by rumours on social media about child abduction in India. Atrocities committed in Rakhine state of Myanmar as a result of fake news on Facebook. And false reports spreading on social media at the height of the devastating flooding in southeastern parts of Laos. These are just some of the most recent examples of how fake news can wreak havoc and lead to tragedies. Thailand also has had its fair share of being a victim of fake news at the height of its political conflicts.

And fake news knows no boundaries. Fake news that originates in one country has the potential to incite hatred and animosity across the borders.

And how fake news is disseminated is getting more complicated. Now we are hearing more and more about a new form of fake news, known as “DeepFakes”, a technology that uses artificial intelligence to imitate voices and make people say things they didn’t say. Just imagine what kind of chaos this could cause if they involve religious or racial issues.

Good news is that governments have started paying attention to the problem of fake news. Tackling fake news is now on the agenda of the governments of ASEAN countries. In May this year, information ministers of ASEAN met in Singapore and came up with a framework on how to deal with this new challenge.

But on the other hand, once governments start acting on issues related to the media and freedom of expression, we should also start worrying. Because governments have different interpretations of the term fake news. Some governments in the region have responded to the challenge by coming up with laws or legal measures which on the surface may sound innocuous. Our friends from Malaysia probably can share with us how the anti-fake news law introduced by the previous government in your country has been used to silence critics of those in power.

But the latest we heard is that the law has already been repealed. My country, Thailand, has its own cyber-security law which officially was designed to deal with falsehoods on the internet but is seen by critics as a legal instrument to stifle voices critical of the authorities.

Because of its effects on everyone in the society, fighting against fake news shouldn’t be a task left to any specific groups of people. It should be a joint effort of all stake-holders in the society. Media practitioners, including all of us here today, have the obligation to play a crucial role in dealing with this new phenomenon.

So, today’s forum should provide us with an important opportunity for leading media representatives from across the region to share their experience and their best practices in confronting the challenge of fake news. What we should be aiming at is not only to fight falsehoods on a case by case basis but to find ways to work together to help create informed and media literate societies – because that’s the only long-term solution to deal with the challenge of fake news.

We have a series of other activities lined up under the Action Plan for the rest of the year. And, of course, we will keep you all updated on their progress and hope to have your participation.
So, on behalf of CAJ, I wish you all success in your deliberations and exchange of views at today’s forum. And once again many thanks to you all for being here.
Thank you.